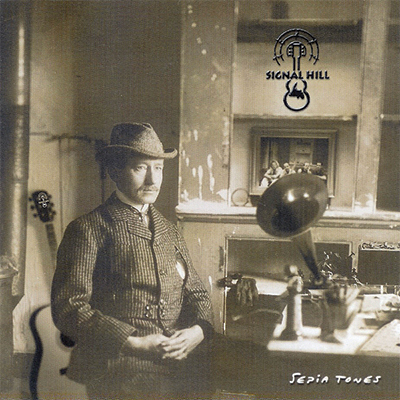 2001: This is Signal Hill’s third CD and first real studio album. Released in 2001 and recorded at Idea of East Productions, this CD features some original material from Greg Tobin and Jason Campbell. The front cover is of G. Marconi, who conducted the first trans-Atlantic wireless cable transmission from Cabot Tower, which rests atop of Signal Hill in St. John’s. Permission for this famous experiment was given in writing by the post master of the time, Jason’s great-grandfather, William Campbell. Sepia Tones also marked the departure of Paul Lamb and the addition of Greg Tobin on lead guitar and Terry Chaplin on Drums. In addition to the original music, each band member sang one cover song on that album. Antares Auto-Tune, having been recently invented, was novel and happily used on some of the vocals on Sepia Tones.