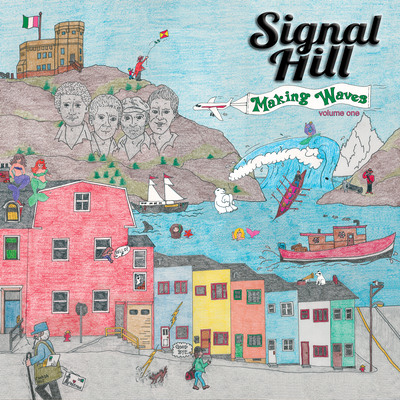 2013: Originally released as the first volume of a planned, double Making Waves record. The Bass, Drums and 6-string for both volumes were recorded in the Lower Deck Tap Room, with Scooter in a control booth up in the Sail Loft. Perhaps if you listen carefully you can hear Paul Lamb & Wreckhouse playing downstairs in the pub, with the odd beer keg firing! Vocals, Piano and 12-string were recorded at Jason’s Velvet Cod Studio whenever Signal Hill had a rare night off, usually between the hours of midnight and 5:00 am. Making Waves is the second studio and sixth full album from Signal Hill. No overdubs or auto-tuned vocals here! Just four voices and four instruments, playing the songs you love! Available on CD and high quality 180 gram vinyl. Mastered separately for both. Artwork was hand drawn by long time CD girl, Melissa Nowe! The front and back covers hold plenty of hidden treasures within a city of puns and song references.